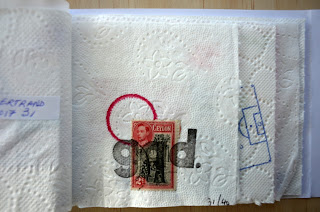 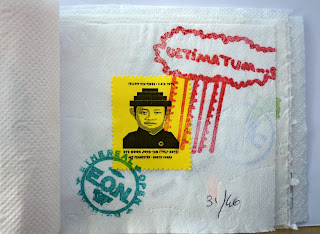 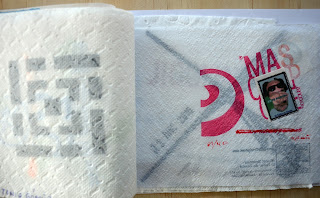 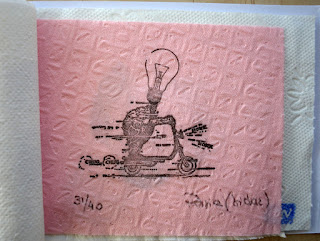 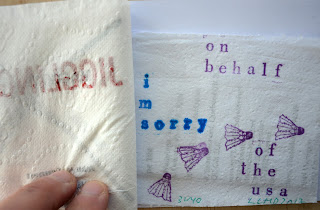 Australia
Vizma Bruns . Teresa Lawrence
Begium
Miche-Art-Universalis
Canada
Diane Bertrand . R.F. Cõté
Germany
Anna Karina Fries . Uli Grohmann
Siggi Liersch . OBA Mail Art Group
Jurgen O.Olbrich . TICTAC
Greece
Katerina Nikoltsou
Italy
Vittore Baroni . Serse Luigetti
Giovanni Strada
Spain
Antonio Gomez. Miguel Jimenez
Ukraine
Lubomyr Tymkiv
USA
John M.Bennett . Laura Dunn
Wipe
Wipe is a small assembling publication in which toilet paper is the medium. The use of a nonarchival, indeed anti-archival medium, is intentional, with the ephemerality and fragility of the medium insharp contrast with the artistic concern for archival materials. Conceived as a playful lightweight publication to circumvent postage costs, Wipe nods to Duchamp’s urinal and challenges contributors to make work on a medium that is almost anti-art.
Contributors source their own toilet paper, a source of fascination in itself and a comment on the hygiene practices of different societies. In spite of its intended ephemerality, toilet paper allows rubberstamping, stitching, collaging, and even frottaging. When 20 contributions are received, Wipe is distributed to participants by mail.(text by Susan Hartigan)
Limited copies of WIPE 104 are available for sale for $20 US (including international p&p) email for further details.
Posted by david dellafiora at 1:57 AM No comments: 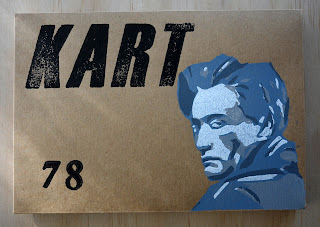 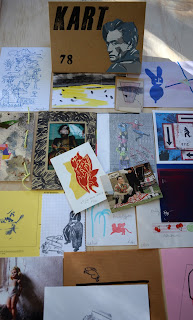 The Journal Of Field Study International

In this 21st edition of the Field Report we celebrate DADA’s centenary and MYA2016 (a year of archives in motion) with multiple works from the Network. This edition features Ubu Roi on the cover, a work by Alfred Jarry that caused a riot on its first performance 120 years ago. With the election of the United States own version of Ubu Roi we are now in treacherous times.
100 years after Cabaret Voltaire, mail artists have created responses that include sound poetry, experiments with words, collage, performances and political satire, all forms that the original DADA artists played with in 1916. And in recognition of Switzerland as the first home of DADA, Renée  Magaña’s  Landscape of Residency includes Swiss fungal spores (plus one from Mexico).
The Field Report is still a tangible traditional assemblage in a world in which art production is increasingly digital. When Lucy Lippard published The dematerialisation of the art object in 1973 she was considering the increasing supremacy of conceptual art rather than digital. But today, where artforms are increasingly dematerialised, publications such as the Field Report remind us that tangible and material forms perform a role as singular and resonant artefacts.
This 2016 edition opens and closes with interpretations of life and includes works that are tactile, fragile, documentary, and sensory.  In Geelong the Retail Cargo Cult presented Thank you. Please come again, a series of handmade shrines and in Corio they burnt a bunyip. Peter Müller has created an inventory of plastic spoons while Anna Banana makes a record of her mail in Artist’s Proof. Tangible artworks and snail mail defy the digitalisation of work and materiality is still the fundamental premise of mailart.
Thanks to Uli Grohmann for sending 100 Grimm-Mail-Art documentations to supplement the Field Report. Wonderful to see a physical documentation of a mailart project rather than a link to a blog, which as becomes the unfortunate standard.
The Field Report is now collected at the State Library of Queensland (thanks to Helen Cole and Christene Drewe) and Wipe is collected at the Art Gallery of New South Wales (thanks to Peter Kingston and Steven Miller).
Field Study began in 1993 as a way of reclaiming the negative spaces between art and life. Activities stemming from Field Study are emanations and group emanations are manifestations. Field Study sees each work as a manifestation of a collective spirit. Everyone is welcome to become a member of Field Study, irrespective of arts practice, and contribute to the Field Report.
David Dellafiora
Field Study Emanations by

The Field Report is the annual of Field Study International, produced since 1996 in the form of an assembling book. Artists are invited to create an edition of 100 pages conceived as a ‘Field Study Emanation’. Works include documentations of performances, actions, instructions, manifestoes, journey works, tracts, rants, instructions, manifestoes, reflections and experiments. Each issue contains the work of about fifty artists. Size14.5x21cm, wire bound, hand stamped, numbered.

A limited number of the 2016 Field Reports are available for sale cost $60 US (includes international p+p) email for details
Posted by david dellafiora at 1:25 AM No comments: